Walking The Walk-Rather Then Just Talking The Talk.'' 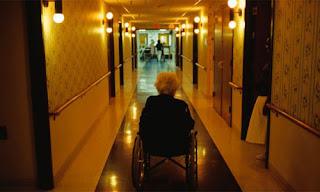 Today I was dispatched to pick -up at one of our  seniors residences. On arrival I saw two personal support workers{P.S.W} standing by a very elderly woman in a wheel chair.Of course my first reaction was "oh great this is going to be a time consuming pain in the ass".(A piss poor attitude from the get go.)
One of the psw's opened my passenger door and told me "we have to get the lady in".You have to get her in, not me, I replied.Furthermore I told her we have a wheel chair van available and that's what you should have booked.The psw claimed she wasn't aware of that-and asked if we could give it a go with my car.
Go ahead I mumbled, as I engaged myself in a rather juvenile "shit fit".I sat there fuming as they struggled with this poor woman-who had to weigh all of ninety pounds.I turned the meter on as they jostled her around, trying to figure out the best way to get her in the car.Christ almighty I thought-and "these two, do this for a living!"Mean while the old woman was having a shit fit of her own.She was shaking like a leaf and voicing in no uncertain terms her lack of confidence in the two psws ability to get her into the cab, in one piece.(so that made two of us)
When they did finally manage to get her in,she was pretty much horizontal across my front seat.I managed to get her vertical enough -and thus off my lap-to get her seat belt fastened.I then put her wheel chair in the trunk, tied the lid down-and we were off.As we drove I asked the psws "what in God's name was this visibly fragile woman doing going out".She has a dentist appointment at the mall-came the reply.
Apparently she had not been out of bed for a year-the dental visit was an urgent matter.As we continued on towards the mall-I started to have a case of the guilt's.I was thinking about all the times I preached the golden rule to my friends."No one gives a shit about anyone other then them selves" I can also often be heard lamenting.
I thought of my late mother-fragile herself in her last years.What would she think if she saw how I treated this old woman- with such impatience and indifference.I was feeling rather ashamed of my behaviour as we pulled into the mall.
Wanting to rectify this-I told the psw's to leave the lady-and that I would get her out, and into her chair.
I took on a completely different attitude as I opened her door."Listen darl'in" I told her, "I am a big strong guy and I want you to just put your arms around my neck-like you were giving me a big hug".'Well you do look strong she replied"-''you won't let me fall will you?"Not a chance I told her-"I will hold on to you like it was our last dance"! This made her smile as she reached out and timidly put her arms around me.I gently lifted her up-she panicked a little-and I reassured her that she was safe in my arms.I slowly got her turned around and was able to get her comfortably into her wheel chair.
As the psw's  prepared to wheel her into the mall-I told them that if the wheel chair van was not available when they were ready to go back-to just ask for me and I would come back for them.Which I ended up doing a couple of hours later.With a little attitude adjustment I was back "treating people the way I would want them to treat me".
Posted by Cabbie Joe at 5:48 PM