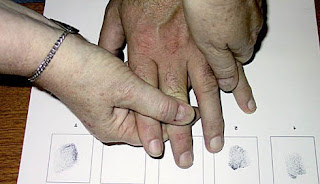 It is time for the annual renewal of my cab license.Our town requires a criminal record search,a drivers abstract, and two passport size photos -to be submitted with the renewal application each year.
I thought I would get the process started today-as it is due by the end of this month.So I stopped in at our local police station to get a criminal record search done.Much to my surprise when I also asked for a vulnerable sector verification to be included(as I have for the past 16 years) I was told that things in that area had changed.The women at the counter informed me that the RCMP (our equivalent to the American's FBI) the policing body that handles these searches -now requires applicants for this search to be finger printed.I was told that  this pertains to men over a certain age who have a birthday matching that of a convicted-but since pardoned offender.So she ran my birth date on the computer,and sure enough my birthday came up as a match to some  criminal or worse yet some pervert! I balked at this and strongly exclaimed to her that "I have never committed a crime in my life-let alone been convicted of one!"
That may be true she replied "but this new policy was put in to effect to catch those offenders who may have changed their name and not notified the RCMP". This is bloody ridiculous-I have never changed my name-and this farce of a policy smacks of a police state! It also smacks me large as discrimination based on  my age and gender.  I'll be damned if as "an innocent tax paying citizen" I am going submit to having my finger prints taken to appease the police-because I share a birthdate with some scum bag.This has to be a violation of my rights under the "Canadian Charter of Rights and Freedoms" which I quote here~"Part one  "15. (1) Every individual is equal before and under the law and has the right to the equal protection and equal benefit of the law without discrimination and, in particular, without discrimination based on race, national or ethnic origin, colour, religion, sex, age or mental or physical disability."
As I told the women at the police station I will forgo that part of the search for now-as I am not sure that its even required by the towns by-law department.But more importantly I want to challenge this new policy. Fortunately for me my oldest brother is a top notch human rights lawyer-who has his own law firm out on the west coast.I called him immediately after leaving the police station.He agreed with me that this new policy appears to be discriminatory.He has asked that I fax all the information regarding it to his office and he will look into it further.Stay tuned.
Posted by Cabbie Joe at 5:46 PM 7 comments: