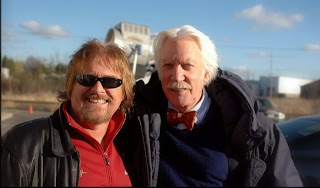 Meeting Donald Sutherland today, was without a doubt, the highlight of the year for me .
He has been in town for the past week filming his new movie "Man On The Train".I had been cruising around town in my cab,when I got a call from my buddy and fellow Cabbie Grizz."Come on out to the west side plaza,I just had my photo taken with Donald Sutherland". What I exclaimed-"you lucky bugger,I'm a big fan of his".
So I immediately booked it west bound to check out the action.When I arrived the parking lot was all a buzz with the movie crew shooting a scene at a local barbershop.Grizz was off duty sitting in his big black GMC, camera in hand.Being a retired copper and active freelance photographer,as well as a part-time cabbie,the Grizz doesn't miss much.
So I asked him, how did you manage to get a photo with Mr. Sutherland? Easy he say's,I just went up to him and asked if I could have my picture taken with him,and he said sure.So one of the crew on hand, took Grizz's camera, and was kind enough to take some nice shots.
Jeez I said you got stones-I wouldn't have the nerve to do that.But I wish I did, I told him. "Mr.Sutherland is not only a great actor,but also a great Canadian".Exactly Grizz replied,"the man's one of us Joe, a fellow Canuck,go on up and ask him,and I'll take the picture".
So after some humming and hawing on my part,and knowing I'd never get another chance to meet him,I said what the hell let's go.
As we waded through the crew surrounding Mr.Sutherland,I kept thinking some security goon will stop us and tell us to piss off.
But on the contrary I didn't see any security people,and the crew let us through no problem.
I approached the actor said hello, put out my hand,he shook it,I then asked if my buddy could take a picture of us,and he said sure, no problem.I was delighted,Mr Sutherland could not have been more gracious.
Now here is a famous actor,who has appeared in well over one hundred films,with his ego firmly intact.
I have never in all my years, even been close to a movie star,let alone had my photo taken with one.
You are a true Canadian gentleman Mr. Sutherland,and you made this small town cabbie's day.Thank you!
Posted by Cabbie Joe at 3:15 AM