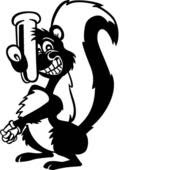 Immediately the cab is filled with the putrid smell of skunk spray."My buddies dog just got sprayed  and I caught part of it",he says."I hope I don't smell too bad".
"Bad"?? I tell him-"buddy you smell like you slept with the fucking thing!"
Are you still going to take me home he asks? A little late for that question pal-you and the "stink" are in the car now I say- as I button down all four windows.
As we proceed to his ritzy home in the north end of town, the smell ripens and I get an intense headache. Its a $15.00 fare-and I cant get this dude out of the cab fast enough.He pays by debit and gives me a lousy $1.50 tip thanking me profusely for the ride.Ya well I guess you will be sleeping the garage tonight I tell him.
Its bar rush and as I clear the fare over the radio-I tell the dispatcher the situation.
Danny I say "my car just wreaks-looks like I will have to call it a night". He is not impressed."Just do one more he says-its a $40.00 fare out of town".
Alright I replied-trying to think of how to explain to the next fare why the inside of my cab smells like a skunks den. I decide to tell them I hit one dead on, on the road-thus the intense smell.
I pop three Tylenol for the worsening headache and head over to pick the fare up.
I arrive and two pretty young ladies get in the back.I wait rather anxiously for their reaction to the odour.They give me directions to their house in the country.As I am about to apologize for the smell-one of the girls exclaims "man it smells good in here." What kind of cologne are you wearing-she asks.I stifle a laugh and tell her, "musk" good ole "musk".
But I couldn't hold it in any longer, and I burst out laughing-are you two drunk I ask?
Actually no-were not came the reply-why do you ask?So I told them the story and all three of us burst out laughing.They still insisted the cab smelled nice, as I pulled into their driveway and wished them good-night.
"People"-ya gotta love them!
Posted by Cabbie Joe at 2:35 PM