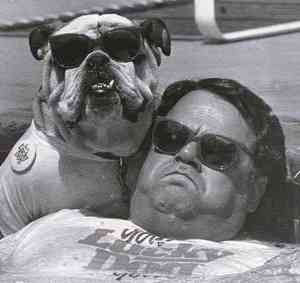 Its a nice place,two Mercedes are parked in the driveway.The fellow comes out gets in the cab,and in  what I assume is a mid-east accent,tells me "you take me to liquor store".
It smells like he has already had a few, but what the hells a few more.
As we are pulling away I mention to him what a nice place he has.Yes he replies, "I am architect",ah that must be interesting I say."Not interesting now,I have bad back" he says.I don't make the connection here,but then I don't really care,I'm just making conversation-which I will soon regret.
Buy the time we hit the store he has informed me that not only has he designed half the town,but that he also owns 18 gas stations,played football for the BC lions,has a 6th degree black belt in karate,his wife is a bio-chemist,and his son is a world champion lacrosse player.
Uh-huh,now I'm think'in this dudes a french fry short of a happy meal-a genuine looney toon.
Now he wants me to go in the store with him,and carry out his beer,two six packs!
I start to make a minor protest,about that not being in my job description..."you must do this" he says,"then they know  I am not driving".I'm thinking how does my presence in the store prove he is not driving-its not like I have a freak'in uniform on.Not that the staff even cares,their only concern is that he be sober enough to buy booze,and he was.
But not wanting to prolong this whacky situation any further I agreed to go in with him and carry the beer.
Now were in the store and he starts making bizzare comments to the other patrons about their choice of booze.
He goes over to one guy,picks up a bottle of whisky right out of the guys buggy and tells him "this is not whiskey,this is pony piss!"
Great I think,now he is going to get his butt kicked,"why me..why do I always end up with the wingnuts!"
Thankfully this guys reaction was to just grab his bottle back, roll his eyes and walk away.
Before he has a chance to have any further confrontations,I grab his beer,he pays for it,and I hustle him back out to the cab.
When we arrive back at his house he wants to pay the 13 dollar fare with a fifty dollar bill,which just my freaking luck,I had no change for.
"You come in house he says,I get you a twenty."Once were in the house,he insists on showing me around.
So I do the "oh ya,this is great,nice gym,yes beautiful furniture" routine-thinking the whole time"buddy please,just pay me, so I can get the fuck outta here".
During this tour we come across a dog walking around with a leash attached to its collar.The guy says,"I not here,this dog kill you." I almost burst out laughing-it was a bloody pug,it didn't even so much as bark!
But I humour him and tell him,"ya thats one mean look'in son of a bitch."
After begging off his invitation of a drink,and a lesson on how to make a million dollars,I finally got my money,and was able to make my leave.
As I walked back to my cab,I wondered how he had managed to acquire the nice house and all the toys,cuz he sure had some marbles missing!
Posted by Cabbie Joe at 3:59 AM