You Know You Have Followed The Straight And Narrow To Long When... 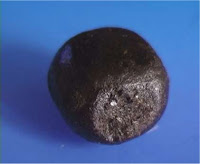 I picked up a really nice group of people at a local pub tonight.They were headed out to what I assume was their home in a rural area,about a twenty minute drive from town.
From their accents I gathered they were from somewhere in the U.K.We all laughed and joked,and listened to some good music, on a station requested by the fellow sitting up front with me.
When we reached their destination,this fellow paid me and gave me a very generous $7.00 tip.As he was getting out of the cab,he also handed me something else."This is also for you he said" as he passed me a small round piece of what looked like black gum,the size of a smartie.I at first thought he was being a smart ass-and asked him what the hell is this? (Duh) The guy who had to be in his mid-forties,just smiled pointed to his nose and closed the door.I was about to toss it out the window,when I got a whiff of it.It smelled faintly like pot-this is when the little bulb in my brain went on, and I realized it was a probably a piece of hash.
Though I have no issue with what folks choose to smoke (I'd much rather have a fare stoned on pot,then pissed drunk on booze any day) I literally hadn't seen a piece of hash since I was in my teen's.
That scene is just not a part of my life style.But I had to laugh to myself as I drove back to town-the guy must have thought I was from mars!
As for the small black gummy stuff-I passed it on to someone who would enjoy it.
Posted by Cabbie Joe at 5:47 AM