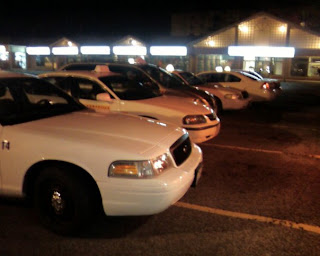 It was a rather slow night in Beanville,not much money to be made.Maybe all the boys and girls were at an AA meeting,because they sure as hell were not out drinking.
Which left most of us sitting in empty parking lots,shooting the breeze.Sharing some taxi tales, and having a few laughs,usually at each others expense.
Some of the cast of cabbie characters out tonight included Kenny "the copper" a retired Police Officer and good pal. Ken's a great guy, and can always be counted on to regale the crew with some fascinating stories from his many years on the Police force.
Then we had Sammy "four eyes," a semi-retired scam artist, and full time sociopath.This guy can spew the most outlandish bull shit and have you almost believing it.He is definitely in the wrong business,he should be selling used cars.
Mike "the biker" was there as well.Mikey looks just like an outlaw biker,with all his tattoos,leather garb, and Harley gear .The fact that he has never even been on a motorcycle,seems to be just a minor detail...hmmm.
Then we have yours truly, an ex-trucker,former- and very temporary - Private investigator,and now in my 15th year,the longest serving cabbie in town.Oh and lest I forget,according to some, an incorrigible skirt chaser.
With a cast like that-and thats only a fraction of them-sharing some war stories,the night, though not very profitable,was at least entertaining.

Note: Names and places have been changed,to protect the innocent...and the guilty.
Posted by Cabbie Joe at 5:49 AM