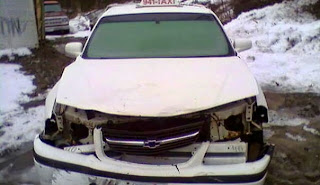 The cab biz always seems to attract a colorful cast of characters from various back grounds.

One particular fellow named Karl was no exception,he was a young man in his late twenties coming from a fairly well off family.

Karl was a good looking guy,well read with a razor sharp wit,he also unfortunately had a drinking problem.

He was on and off with the cab co. for a few years,working mainly as a night driver,thankfully he kept his drinking habit to his off duty time.

But through his problem with the booze he eventually became homeless,which is where motel 21 comes in.

In our yard at the rear of  the office is where we kept our fleet of cab's.

Cab # 21 was an old out of service Chevy that was scheduled to be scrapped.

Six-pack,Karl's nick name,as he was alway's carrying a case of beer under his arm,approached the cab companies owner and asked if he could sleep in the old cab.
The owner with some obvious issues of his own,as this was now the dead of winter, had no problem with six-pack taking up residence in #21.
I was doing night dispatching at the time,and on his off days six-pack would stagger in the front door,use the office bathroom,and then head out to the cab to sleep.
I often had the unenviable job of going out to wake him for whatever shift he might be working at the time.
I was always afraid that after brushing off the snow and often having to wrench the frozen door open, I would find  him  dead from hypothermia.(the engine did not run)
But six-pack managed to survive that whole winter sleeping in what the rest of had now nick named "Motel 21".

I happened to have Karl as a fare the other night,picking him up at a place with much warmer lodging's.
I hadn't seen him for a couple of years,and we had a laugh over his old residence.
He is doing well now, with a steady well paying factory job,a girlfriend and decent living accommodations.
I love happy endings.
.
Note: I have not used this person's real name in order to protect his privacy.
Posted by Cabbie Joe at 2:11 AM