No Sport Widow's In My Life. 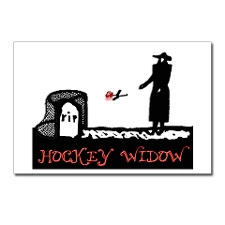 I knew it was going to be a long trip to the airport,when shortly after leaving his driveway,my fare asked me what I thought of "that game last night"...uh what game was that I replied,"well the hockey game of course,the Bruins and the Leaf's,did you not see it he asked?
Well no I said,I'm not really a hockey fan,he looked over at me rather aghast and say's "your not eh...well how about football? Lacrosse? He went on to list a half dozen other sports,to which I replied nope none of the above.
I went on to tell him that actually I was not a sports fan at all,that really set him off,and now with a look of total disdain on his face,he exclaimed "MY GOD MAN,THEN WHAT DO YOU LIKE"?
Now with that comment he has started to piss me off, I'm getting the feeling that his implication is that I am some how less Canadian or less manly all due to my lack of interest in sports.
At this point I'm wondering how he would feel about me slowing down the car to about 60km,shoving him out the door,and seeing if he can do the "tuck and roll", again not very "sporting" of me...but an amusing thought just the same.
Dismissing that, I burst the macho bubble and went on to tell him how much I like books,women,kid's,dog's and that I have always been fascinated by the complexity of human behavior.
It was obvious I hadn't "scored any points" with that response, as he remained pretty much silent for the rest of the trip.
Posted by Cabbie Joe at 3:55 AM